The Zaslav's Tour of Barcelona 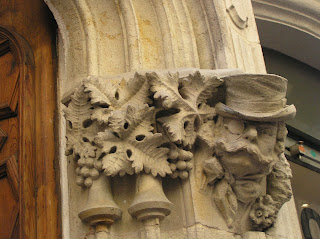 There are some bonuses to staying at the Hotel Florida at Tibidabo in Barcelona. The most obvious are the spectacular views over the city and the quiet and calm that come from being up on the hill. It can, however, be a bit of a problem if your taxi driver gets lost getting there.  Luckily for us, however, we had no such problems. Meeting the family at 10:00 we headed off down the mountain and into Barcelona to explore the history and legends of the city. Our morning walk took us through the old city, and we learned about the long history of the city, it's important Jewish community in the Middle Ages, and the Catalan culture in general. Our tour took us through the old streets of the old city, stopping in the oldest synagogue in Spain (with foundations back to Roman times), where we learned why so many buildings in the Gothic Quarter have steps going down at the entrance. 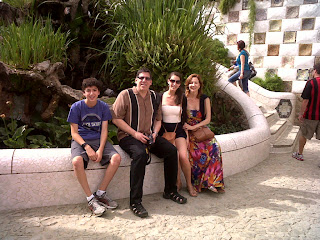 A stop for lunch on an outside terrace refueled us and we were back in the car for the afternoon visits. A change of gears from ancient history brought us to the Moderniste element of Barcelona and it's most important monument: The Sagrada Familia. After we discussed the architectural elements and symbolism of Gaudi's masterpiece, we headed up into the last site of the day, Park Guell. Seeing what Gaudi did with the landscape and how it was all designed to blend into the hill upon which it was constructed is something that is best experienced firsthand. From the mosaic to the pathways to the gardens, everything seems calculated to make sure it's something you never forget. Our day ended where it began, and we headed up the mountain to the hotel to say goodbye. Thanks to the Zaslav family for being such a pleasure to work with!

For more information about your private guided tour in Spain contact The Spanish Touch at 888-480-0013.
Published by Eric Hersey en 7:17 AM