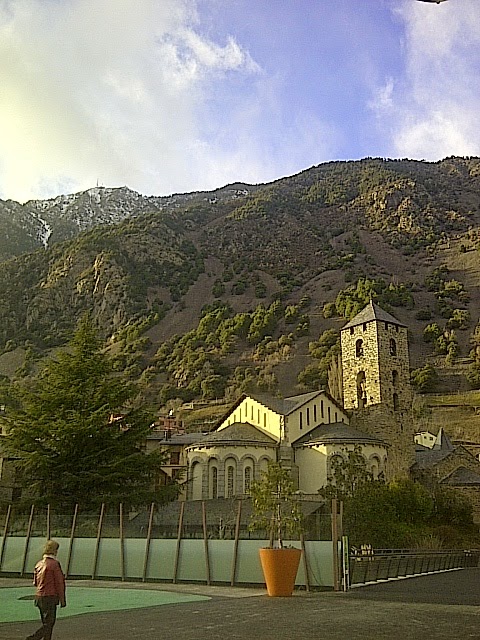 Andorra is one of those places whose mere mention evokes images of a lost mountain country tucked away somewhere time forgot. And for centuries that was probably the most accurate assessment. But in the days of easy transportation, it has become as well known for tax-free shopping as it has for the array of ski resorts and spectacular mountain views that it offers visitors.

We headed up from Barcelona on Saturday morning, taking advantage of a beautiful, if cold winter's day. The drive takes a little under 3 hours, and takes you through some of Catalonia's most scenic country. The farm land slowly turns into mountain scenery, and the snow-capped Pyrenees draw ever closer until finally you are driving past the whitened hill sides and gurgling streams of the mountains themselves.

The city center of Andorra la Vella itself is divided into two basic sections: the shopping area and the old town. When we arrived we took to the shopping side first. Even though this part of town is built up and designed for visitors (after all, the entire country of Andorra has the population of a mid-sized town), there were little touches that showed the character of the town. 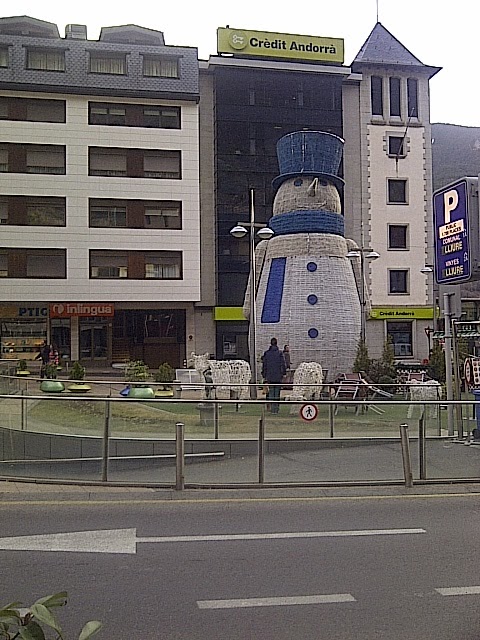 After a delicious lunch of the local heaty chickpea-based stew and a nice lamb roast, we spent some time exploring the old city, its winding streets and traditional Pyrenees stone houses before heading back to Barcelona in time to catch a magnificent sunset over the mountains as we said goodbye to Andorra one last time.

Published by Eric Hersey en 6:45 AM No comments:

Less than an hour south of Madrid on the AVE high speed train lies the city of Ciudad Real, founded by King Alfonso X in the thirteenth century. It's name, which has been changed several times throughout the ages, means Royal City, can be traced back to the year 1420, when King Juan II of Castille awarded the town official status as a city. The city was originally a walled city, just like its more famous neighbor to the North, Toledo, and two sections of the original wall still stand, with the Puerta de Toledo is especially noteworthy. The town also invites the visitor to explore another side of Spanish history with its tribute to the Spanish literary master Miguel de Cervantes. A visit to the Quixote Museum is well worth a visit for any literary enthusiast, and just for fun check out the Clock in the Main Square, with figures from Don Quixote that accompany the chiming of the bells. Semana Santa (Holy Week) is a great time to visit, and offers a great alternative to the often-uncomfortable-packed festivals in Sevilla and Malaga. And lest we forget the wine, Ciudad Real is in the heart of Valdepeñas wine country, so take the opportunity to hit a couple of local wineries!
Published by Eric Hersey en 7:46 AM No comments: 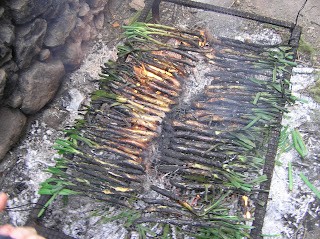 This is the time of year the Catalans have been waiting for: it's Calçots season!! Maybe when I tell you first that a calçot is a vegetable kind of like an onion, only longer, you'll start thinking: these Catalans have got to be nuts to eat something like that. And you might be right, but the charm of this typical dish is the salsa which accompanies it (romesco) and the festive atmosphere in which it takes place.

Calçots constitute a single-dish meal and are cooked on a grill, if possible in the open air and with family and/or friends. Calçots originated in Tarragona, specifically from the region of Valls. The best calçots are those that you buy at the market and then cook immediately at the barbaque. But if you don't feel like cooking, you can go to a Masia or a restaurant in the country where they will prepare them for you in traditional style.

Eating calçots is a unique experience that we recommend to everyone who has the chance to visit Catalunya during this season. For more information on this culinary treasure, or to enjoy a calcotada on your upcoming trip to Spain, contact The Spanish Touch and we'll be glad to help.

Published by Eric Hersey en 6:58 AM No comments: