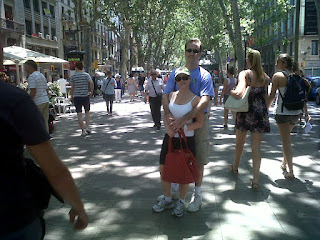 The first full day of Scott and Lisa's tour began in Barcelona city center. Having already wandered around some of the old city yesterday, we headed right across town first thing in the morning to visit Sagrada Familia. Early in the morning has it's advantages as a time to visit. First of all, with the sweltering heat wave that has descended upon most of Spain (temperatures in southern Spain got up over 40C or 104F) it was easier to do the explaining of the exterior without feeling like you might melt into the sidewalk. Secondly, most people seemed to have gotten off to a later than usual start, so even on the inside we had a fair bit of room to wander and take some pictures. 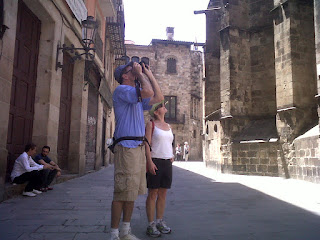 Once we finished with Sagrada Familia we headed back into the old city. Going back in time from Modernisme to Roman civilization is much easier when the city in question is one where history is built on top of itself, layers of civilizations in such a compact area, it really is a treat. Starting at the old Roman walls (of the fully named Colonia Iula Augusta Faventia Paterna Barcino, or Barcino for short) we traced the route of the various groups who have passed through the gates of the city. Romans, Visigoths, Moors, Franks, Jews, Christians, and more have all left their mark on the city.

From the legend of tortures of Saint Eulalia to the horrific bombings of the Italians during the Spanish Civil War to the original location of the Jewish drinking fountain, there is so much to see in Barcelona that to compress it all into one short day is impossible. So we focused on the highlights and pointed out the things that might be of interest during free time. Coming complete circle and ending up once again at the Cathedral we headed back to drop them off for a spot of lunch before hitting the gym and heading off to the Flamenco show, where they were able to catch 1 and a half shows!

For more information regarding private tours in Spain, contact The Spanish Touch at 888-480-0013.
Published by Eric Hersey en 2:39 PM