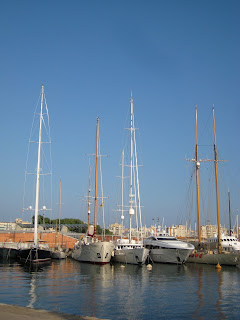 Barcelona is famous for many reasons, and the region surrounding it as well. But some of these regions have managed to escape the spotlight. At The Spanish Touch we believe that the best way to travel is to be informed about the possibilities, and we view it as a part of our job to help interested visitors to discover the region, beyond just the pictures and "major" tourist attractions. And today's search brings us closer to Barcelona than people generally consider. When we talk about the Coastal regions people think of the Costa Brava, or the Costa Daurada along the south. but the Maresme coast, that stretches between the city of Barcelona and the Costa Brava, offers some spectacular ideas for the inquisitive explorer.


Take, for example, the capital city of Mataro: originally a Roman city, the town was also the birthplace and home Modernisme's most important figures, Josep Puig i Cadafalch. The town center features pedestrian walkways which wind through the stores and buildings, leading to the 17th century church, a modernista market and even Roman ruins.

Castle lovers have several options as well, as both the Castle of Vilassar and the Tower of Santa Susanna can be visited, and provide visitors an opportunity to discover the history and legends of the coastal towns.  The ruins of Burriac Castle are one of the most popular sites for hikers in the area.

And speaking of hiking, both the Montnegre Natural Park and the Serralada Litoral foothills offer ample opportunities for a day in the great outdoors, with visits to ancient dolmens, castle ruins, and spectacular panoramas over the sea. Horseback riding and quad rentals are also quite popular as well.

Finally, i would be remiss if I did not mention food and wine. From having one of the top restaurants in the world (Carme Ruscalleda's Sant Pau) to up-and-coming restaurants like Tresmacarrons to some of the best tapas along the coast, the culinary offering is sure to satisfy even the most demanding palate.

And the Alella wine region, the smallest in Spain, has been winning awards in recent years for their unique wines and cavas, and enjoying a picnic in the vineyards just a half hour outside of Barcelona is a truly wonderful way to spend a spring or summer afternoon.

For more information regarding private tours in the Barcelona region contact The Spanish Touch at 888-480-0013.
Published by Eric Hersey en 7:12 AM No comments: 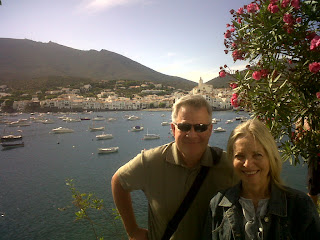 The Costa Brava (a name made up for it in the 20th century, and much like Crocodile Dundee, it was given because they thought it would be good for the tourism industry), is the stretch of coast that runs along the northern part of Catalonia to the French border. Let's dispel a common misconception: it doesn't actually border Barcelona. Th the coast just north of the city is called the Maresme, and I'll be writing about that area in the future. the Costa Brava is an area which runs from Blanes (about 60 km north of the city) to the French border. Some of its more famous towns include:

Roses -  in the Cap de Creus Natural Park, a spectacular beach town, and the closest "major" town to the now closed "El Bulli" restaurant.
Cadaques - an artists village, once a popular retreat for local and international artists due to its beauty and quiet charm, which, despite the crowds that pile in during the summer months, it still manages to retain most of the year. It's also a 1 km walk to Portlligat, Salvador Dali's home.
Tossa de Mar - another fishing village, most notable for its medieval ramparts right on the sea cliff overlooking the town.
Lloret de Mar - unfortunately better known for its popularity among European youth for cheap bars and clubs, the town is trying to reinvent itself and focus on the beauty of the region, which includes several botanical gardens which make the visit more than worthwhile.

But exploring the region a bit more yields so much more. There are medieval castles to be explored in towns like Torreolla de Montgri and Platja D'Aro. For ancient history buffs check out the Roman and Greek ruins at Empúries and  the Iberian Settlement at Ullastret. But if you just want a taste of the traditional, old world fishing village, you can go to the less well-known towns like Palafrugell, L'Escala or Selva.

The Spanish Touch is now offering private tours to the Costa Brava for people who are looking to get more out of their visit to Spain than just the "sun and beach" experience that for so long represented Spain. Day trips, weekend excursions and fully guided vacations can be arranged and customized to fit your particular needs, maximizing your time and your experience.
Published by Eric Hersey en 6:42 AM No comments: