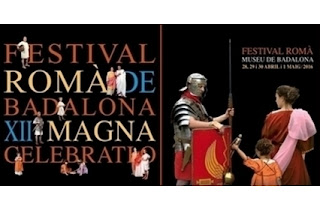 The whole region of Catalonia has Roman roots that stretch back over two thousand years. The Romans arrived at the Greek trading village of Empuries and made their way down the coast, eventually stopping in what would become modern day Barcelona. However, before they got there they arrived at the city which borders Barcelona today to the north: Badalona.

The city of Badalona is the the third largest city in Catalonia, after Barcelona and L'Hospitalet, and bears a proud heritage of its Roman founders. The Museum of Badalona is one of the hidden jewels of the region for lovers of the ancient world. Every year the Museum and the city team up to present the Roman Festival during the last weekend in April.

This year is the 12th annual edition of the Magna Celebracio Festival Roma de Badalona. Discover the crafts and trades, daily routines and, naturally, the dress of the Romans. With events and workshops for people of all ages, it's a great way to get out of Barcelona without ever leaving a city, and to experience the traditions and heritage of the local culture in a once a year event!

Contact us for more information or to book a private tour in Barcelona:

Email ThisBlogThis!Share to TwitterShare to FacebookShare to Pinterest
Etiquetas: Events in Spain, Festivities