Malaga - more than just the gateway to the Costa Del Sol 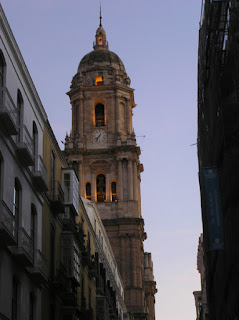 For years the city of Malaga was famous more for what it was close to than what it is. People arrived in Malaga only to depart immediately for the tourist haven that is the Costa del Sol. But recent years have seen great strides made in Malaga's infrustructure, and people are starting to take more notice of this 2000 year old city. The Roman Amphitheater, the Moorish Alacazaba-Gibralfaro Castle complex on top of the hill, and Pablo Picasso have all done their part to bring the spotlight off the hotels and beaches of its neighbors and onto Malaga itself. The Spaniards themselves are noticing the change as well. No other Spanish city experienced more growth in tourism in the first quarter of 2012 than Malaga. Locals as well as visitors from other countries are discovering the treasures of a city that genuinely reflects its people, a city of almost half a million that can make you feel like you're in small town Spain with the friendliness and relaxed attitude of its people, the sunsoaked streets and plazas and plethora or fantastic restaurants along the beach.

For more information on planning a private guided tour in Spain, contact The Spanish Touch at 888-480-0013.

Published by Eric Hersey en 7:34 AM