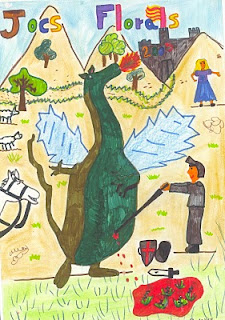 Once upon a time there was a dragon in the town of Montblanc (Tarragona), a very ferocious monster that could run, fly, swim and killed lots of animals and people of the town and around the area. People from Montblanc reached the following agreement: they would give, by drawing lots, a person every day to the dragon to calm down its hunger. The pact seemed to work for a long time until it reached the turn of the princess to be eaten by the terrible dragon. All the citizens of Montblanc were very sad for the young princess and some of them offered their lives to prevent the death of the beautiful and delicate lady. But the king was determined to sacrifice his daughter the same way other parents needed to sacrifice their children. The poor girl walked towards the lake where the dragon was living, and was prepared to die when a knight, dressed in armour and riding a white horse, stopped her on her way to be eaten. The knight was Sant Jordi and, getting off the horse, caught the dragon by its neck and gave it to the princess who brought it to the main square of Montblanc and the dragon was finally killed by all people of the town. The legend tells that dragon's blood turned into a beautiful red rose.
Published by Elna Belloc en 4:35 PM