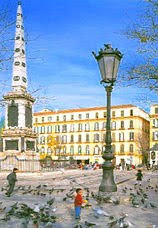 This week marks the 13th annual "Festival de Cine en Español" (Spanish-language Film Festival) in Malaga. Designed to raise the profile of Spanish-speaking cinema, this year's festival takes place from April 17 - 24 in the capital of the Costa Del Sol, and origin of Spain's most prominent ex-pat, Antonio Banderas. The films are being shown in various cinemas and theaters around Malaga, including some wonderful settings such as the Teatro Cervantes, Museu Picasso and the University of Malaga. In the ever-popular Plaza de la Merced you can find the Zonazine. It promises to be a fun and exciting week in Malaga!

For more information about the Festival or things to do in Malaga, contact The Spanish Touch.
Published by Eric Hersey en 4:43 PM

Email ThisBlogThis!Share to TwitterShare to FacebookShare to Pinterest
Etiquetas: About Spain, Festivities