When we think of Barcelona most of us are drawn immediately to its history, architecture and vibrant city life. Restaurants, Gothic buildings, churches, Gaudi, Las Ramblas....there is so much to see and do that sometimes you just need to stop and smell the roses. So today I want to bring the topic around to where you can do just that. The city of Barcelona, when it expanded, was built to incorporate green spaces. Some are easier to find than others, but they are all unique oasis of tranquility and a great place to step out of the hustle and bustle for a day, or even just a few hours. Sit and read, have a picnic with your friends, or just stroll the gardens and enjoy their peace and beauty. I'll leave Park Guell off the list for the time being, as Gaudi´s urban adventure is a different topic all together.

So here, in no particular order, are five of my favorite parks within the city limits of Barcelona.

1) Parc de la Ciutadella - The largest, and most visible, park in the city. Very popular with locals and visitors alike, it stands on the remains of the military prison built by the conquering French upon the fall of Barcelona in 1714. Site of the 1888 Universal Fair, it is famous for hosting several modernista treasures, including Domenech i Montaner's Tres Dragons and the Gaudi fountain. It's also home to the Catalan Government and the Barcelona Zoo. The walkways and fountains are usually filled with joggers, walkers and friends enjoying the Mediterranean climate. For people watching, laying on the grass with a good book or just a quick break on your way to the Arc de Triomf, this park is a classic of the city.

2) Parc de Cervantes - At the end of Avinguda Diagonal we find one of the most overlooked parks in the city. Tucked into a corner between two of the city's main thoroughfares, just at the entrance into the city in the fashionable Pedralbes district, from April to November the park is more of a giant rose garden (over 230 varieties of roses are on display in an area of about 10 acres known as the Pergola. The rest of the park is a combination of lush green areas, plants and trees, perfect for escaping for a stroll, a jog or a picnic and just let yourself go.

3) Parc de Laberint - Barcelona's oldest park, dating back to the end of the 18th century, the Park of the Labyrinth draws its name from the maze of cypress bushes, it encompasses over 100 acres of woodland beauty in the Horta-Guinardo section of the city. The original garden was expanded under the watch of Elias Rogent, one of the most influential architects in the early modernista movement. Recent changes to policy make this one of the few parks that charge a nominal surcharge to enter, but the fee is small and woodland setting make this an ideal romantic getaway for an afternoon or an escape with the kids.

4) Parc de l'Oreneta - Up the hill of Collserola, this is one of the best places to get a different perspective on the city. It is ideal for families, as it has a miniature train that runs a route of just under a half mile, going through three tunnels and guaranteed to provide your kids with an unforgettable experience. But for adults, this park in the Sant Gervasi section of the city built on the remains of the Oreneta Castle is the connection between the city and the foothills that encircle the city. Whether you choose to bring a picnic and spread out under a tree to admire the city from above, or you choose to stop at the restaurant, plan at least a half day to get a new perspective on the city.

5) Parc de la Creuta de Coll -  The last park on the list is also a bit of an odd one. This park, in the heart of the Gracia district, is most notable for it´s giant public swimming lake (open in the summer months) and the works of art that you will find there. Built over a former quarry, one of the highlights is the 50 ton Elogia de l'Aigua by Basque sculptor Eduardo Chillida (whose works in San Sebastian are on the cover of guidebooks around the world). It is a small park with picnic benches, walkways and offers visitors a different sort of park to stop by and enjoy. 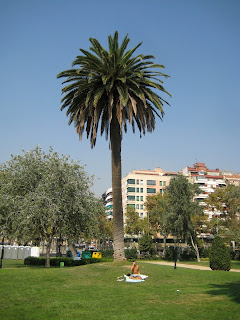 Published by Eric Hersey en 8:20 AM