Montserrat and Barcelona Day Tour with friends - part I 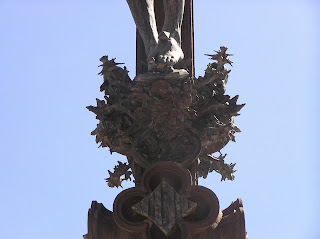 When Ken contacted me about visiting Barcelona, there were lots of possibilities open to him. Several of the guys in the group had been to Barcelona before, and as they were arriving before the cruise and staying in the city afterwards as well, the question was what/how was the best way to get the most out of their experience. The decision was made to explore the city on their own initially, and when they got back we would take them around. 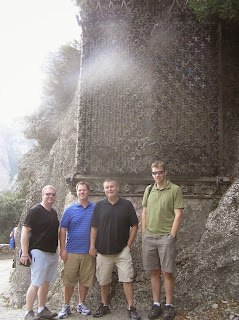 One of the byproducts of Barcelona's explosion as a cruise destination has been the increase in traffic on a Sunday morning in getting to the port. But Jose - our driver - and I made our way slowly but surely to the port to meet Ken and the guys on Sunday morning. The first thing is to make sure you've got the right group leader, as I felt bad for some poor soul who approached me as I arrived to ask if I was his contact, or if I was able to help him and his group of friends who apparently were having some difficulties tracking down their guide. But the group was there and our car was waiting, so we piled the luggage into the back of the van and headed out of the city. First stop: Montserrat. Late October is a great time to visit the area that many consider the heart and soul of Catalonia. The sun and mild temperatures made it comfortable without being overbearing, and since the walk to the Holy Cave is an hour-long trek along the up-and-down mountain, it's always nice when the weather cooperates. The 1,300-year history of the monastery, drawing on everything from the earliest counts through the Franco regime's exploits, make the area a unique reference point. The path of the Rosary highlights one of Catalonia's most expressive and cultural relevant times: Modernsisme. Sculptures and mosaics from artists including Gaudi, Puig i Cadalafach and Martorell line the path and provide us a story of the region that might otherwise go untold.

Upon returning from our hike (albeit a bit sweaty from that last bit of uphill hiking), we chanced a peek to see if the Castellers were building the human castles so typical of Catalonia. But alas, at the time they were just milling around biding their time, and as we were on a tight schedule, we had to leave, which we did once we found all the members of the group.

Up next, a visit to the Modernisme temple and Gaudi's urban fantasy.

Published by Eric Hersey en 5:43 AM