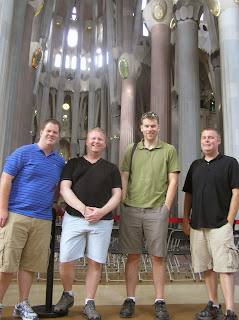 Our visit to the Sagrada Familia was scheduled for 1:00, but as we were running a bit late we arrived closer to 1:30. Not to worry, however. A quick word with the gate personnel and we were in, exploring on our own the greatest exposition of Catalan modernisme: the Sagrada Familia. As I mentioned, several of the members of the group had already seen this breathtaking temple previously, but the changes wrought in the last 3 years have made it a mandatory visit for everyone who comes to Barcelona. From the majestic and celebratory nativity Facade to the somber, sinister Passion Facade to the forest-like feel of the central nave, the church lives as a testament to its architect's ideals. And for an added bonus, the neighborhood town fair was taking place, meaning we got to see the Castellers anyway, from the unique vantage point of the Sagrada Familia! 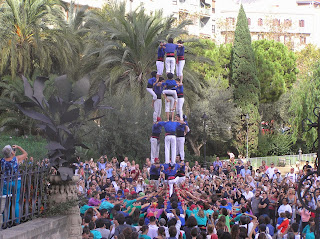 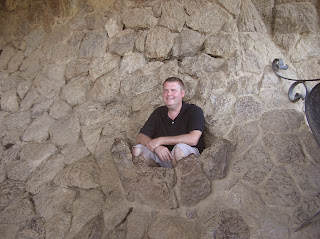 A quick tapas lunch followed before we headed up to the final stop of the day: Park Guell. Having seen his take on a church, Park Guell provides visitors with the chance to see Gaudi's version of a housing community. The buildings are secondary in his scheme to the meshing of man-made with nature. The paths, the steps, the columns and yes, even Drac all melt together to form a park  that is a totally different experience from your standard city park. As we sat on Gaudi's ergonomically-designed benches we were even offered a glass of cava from some locals, who were only too happy to help us feel even more at home.

For more information on planning a private tour in Barcelona, contact The Spanish Touch at 888-480-0013.

Email ThisBlogThis!Share to TwitterShare to FacebookShare to Pinterest
Etiquetas: About Spain, Our Tours