More than a tour - an experience with Bob and Carolyn Grosso 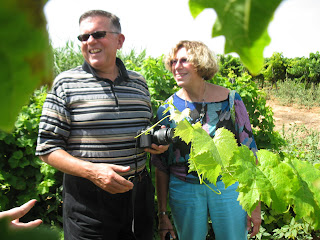 Today I met Bob and Carolyn at the Majestic Hotel along Passeig de Gracia bright and early, both of them ready for a full day of wine and culture. It was a particular pleasure to welcome them to Barcelona as Carolyn is my father's cousin, and the Hersey resemblance is definitely there. We set off in almost no traffic, as August in Spain, even in a metropolis like Barcelona, is pretty much a vacation month, making it much easier than usual to get in and out of the city. And so we zipped out of the city and down the highway a short way to Sant Sadurni D'anoia. 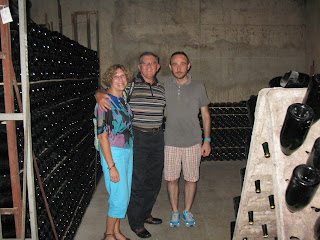 First stop: Rimarts and a great guided tour at the hand of the winemaker himself, as he explained the difference between a handcrafted wine and the industrial process. Between the explanation and then getting the chance to watch the degorgement of a bottle by hand, the Martinez brothers' passion for what they do comes through loud and clear. It's not nostalgia that makes them do what they do, simply that technology, for as advanced as it is in terms of production, cannot yet measure up to the original method in terms of quality. And the proof is right there in the glass in front of us. tiny bubbles rising up from a golden glass of enticing cava. 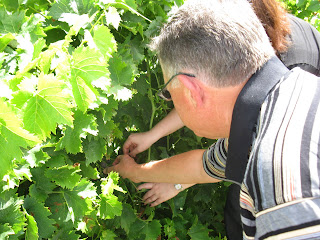 After saying goodbye and talking briefly about what makes the region so well adapted for making sparkling wine, we were off to a second winery for a different wine experience. At Mas Comtal we took a walk through the vineyards, and as the harvest is almost upon us, we were even able to taste the grapes right off the vine! It is a great visual aid to see the difference between Merlot grapes and Red Moscat, and of course the opportunity to eat a grape or two right off the vine is not one that happens every day!  We followed up the walk with a Merlot tasting, including a Rosé, a "standard" red and a fortified dessert wine made using the solera system.

After a traditional lunch at a local restaurant (the fiduea was excellent, as was dessert!) we headed back to Barcelona. Along the way we talked about the history of Barcelona and Catalonia, and how it led to the Modernista movement, of which Gaudi's Sagrada Familia was our destination. Considered by many to be the pinnacle of the Modernista movement, Gaudi's expiatory temple (now a basilica) is a feast for architecture and history lovers, and one almost feels that an hour and a half is hard to do it justice. The history and progression of this masterpiece of Catalan architecture show through the designs, lights, windows, and internal structures of the building at every turn. 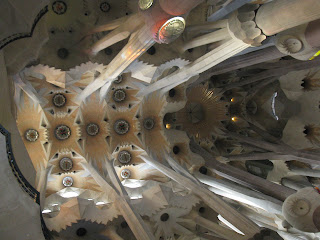 We ended the day back at the hotel, and I sincerely hope that Bob and Carolyn enjoyed their day as much as I enjoyed taking them around. Best of luck on your cruise and I hope to see you again in the not-too-distant future!

For more information regarding your personal Spanish experience contact The Spanish Touch at 888-480-0013.
Published by Eric Hersey en 11:40 AM

Email ThisBlogThis!Share to TwitterShare to FacebookShare to Pinterest
Etiquetas: Food and Wine, News about The Spanish Touch, Our Tours