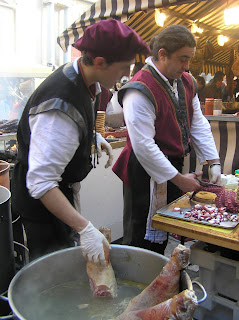 During the middle ages, Vic was one of the most important and powerful cities in Catalonia, and the fair, which recreates the city as it was in the 15th century, brings people from all over. The town of Vic itself lends to the authenticity of the show, as it is replete with buildings still standing from those times, including the cathedral, the Episcopal Museum, the walls and the Mercadal.

From December 5 through 8, the 16th annual Mercat Medieval de Vic will allow you to see demonstrations of how craftsmen of the time operated, eat the traditional foods and all the other activities you expect to find at a fair like this, but there are also medieval dance classes and the traditional Catalan Correfocs. It´s a great way to enhance your visit to Spain and your appreciation for the history of the region.

For more information about visiting local fairs or for help arranging your private guided tour to Spain, contact The Spanish Touch.
Published by Eric Hersey en 6:33 AM

Email ThisBlogThis!Share to TwitterShare to FacebookShare to Pinterest
Etiquetas: About Spain, Festivities