On the last touring day of the trip, we headed up north to two of the Madrid area's inimitable sites: The Monastery of El Escorial and the city of Segovia. The monastery, built by Phillip II in the mid-16th century, is a tribute to the Spanish golden age, and the greatest legacy of master architect Juan de Herrera (the style was actually named after him, Herrerian). The Monastery/Basilica/Palace/Fortress/Royal Pantheon is an incredible assault on the visual senses, from the symbolism of the directions to the unparalleled collection of masterpiece religious art (perhaps it can be even a bit too much sometimes, as Rita mentioned). 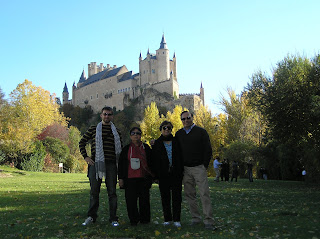 After a quick lunch of (humongous) Iberian pork loin sandwiches we were off again to Segovia, original home of Isabella the Catholic Queen. Rightfully famous for it's gigantic Roman aqueduct, perhaps the most impressive sight was the castle, seen from below alongside the forest. It could have been the season, or the lack of tourists, but the fall colors and the tranquility of the area just took my breathe away. Once more Richard guided us through the cobblestone streets, showing us the numerous palaces and churches, leading us to the castle and finally to a spectacular panoramic right next to the aqueduct at dusk. Segovia really has nothing to envy from any of its more famous neighbors, and it was a great way to end the city tours.

Tomorrow is a day at leisure in Madrid, and our farewell dinner for one last opportunity to enjoy the richness and variety of Spanish cuisine.
Published by Eric Hersey en 11:01 AM