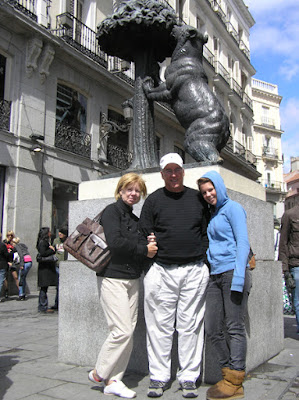 One of the most common pictures taken in Madrid is unquestionably at the statue of 'El Oso y el Madroño'' (the Bear and the Strawberry Tree). But what is the significance of this statue, right in the heart of Madrid?

The bear and the strawberry tree also appear on the coat-of-arms for the city of Madrid.

Historians tell us that the origin of this coat of arms is a familiar story for medieval standards, and can be traced back to the 12th century when it was used as a standard for the army to distinguish groups of knights. It was first used by the troops from Madrid in the campaigns against the Moors in Andalusia.

According to legend, the bear was chosen as the emblem in honor of a brown bear that King Alfonso XI killed on a hunting trip in the mountains surrounding the city. At that time it was not uncommon that these large animals would wander into and around the city limits.

The bear was initially seen with a tower, which was later substituted for the strawberry El oso estaba al principio unido a una torre, que sería sustituída ree. These evergreen trees were a common site in the outskirts of the city during medieval times. However, the origin of this image has a concrete act that took place in the 13th century. At the time there was a dispute beween the city and the clergy about some lands that both sides claimed. They finally reached an agreement with the town kept the tree-filled area and the clergy kept the pastures. That explains why the tree is in the city crest, and the bear was included because at that time it was believed that eating the leaves of the strawberry tree was a rememdy for the Plague.

This is part of our job: telling you the stories and histories of the things you see in Madrid (or any other city) that might otherwise have gone by unnoticed.

Check out our private tours in Madrid and contact us for more information:

Published by Unknown en 9:00 AM

Email ThisBlogThis!Share to TwitterShare to FacebookShare to Pinterest
Etiquetas: Curiosities, Our Tours