The Padillas' last day in Barcelona - Montjuic and Tapas

The last stop on the Padillas' Barcelona adventure was the panoramic views from Montjuic, site of the Castle and the Olympic games, and some of the most breathtaking views over the city. Our first stop was the Mirador Del Alcalde (Mayor's Lookout), from which you have a nice vantage point over the port and Mediterranean. From there we took the cable car over the parks and gardens of Montjuic, and learning the history of the mountain, from the 16th century through to the present. 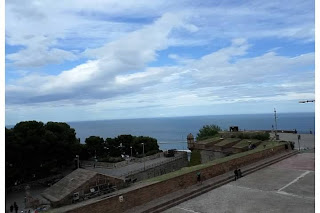 We got off the cable car at the Castle on the top of the hill, a castle that has for centuries overlooked the city below. In recent years the castle has undergone a renovation in its offerings: for years it housed the military museum, but now holds an interesting collection of art expos and historical data. And the views from the top are outstanding!

To conclude the day and their time in Barcelona, we decided to visit one of Barcelona's most well-known tapas bars: The Ciudad Comtal, where we enjoyed an early dinner of local tapas and some lovely wine.


The next stop for the Padillas: Andalusia, where Sevilla, Granada and Malaga await their visitors with that southern Spanish hospitality that has become as much a part of their fame as the white-washed villages and bullrings.