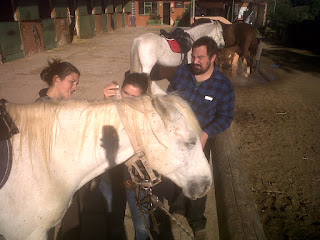 On Sunday I picked up a happy couple for a different sort of Barcelona experience. They had been travelling around Spain, had visited Madrid, taken a Mediterranean cruise and had just arrived in Barcelona the previous day. And now they were headed up to take a horseback ride through the Collserola hills just behind Barcelona. A romantic outing and a unique way to get a different view of the Catalan capital. Their arrival coincided with the coldest weather Barcelona has had in months. Not particularly cold, mind you, just colder than it had been. But Sunday morning broke with a crystal blue sky, and the winds that had whipped the region Saturday had settled down. By midday they had all but blown themselves out. As we headed out to the we talked about the history of the city and Picasso. 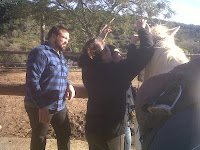 The horse ranch was almost completely empty, as Sunday afternoon is not a very popular time for locals to go out. And the route chosen would take them on the hills where the clear skies would allow for some great panoramas over the city. First they had to get to know the horses, brushing them and learning how to fit the bridle. Naomi even borrowed some riding shoes from the instructor. Two and a half hours later we headed back to the city, and both of them were extremely happy with their experience, having thoroughly enjoyed their romantic, personalized adventure.

For more information on private guided tours in Barcelona and throughout Spain, contact The Spanish Touch at 888-480-0013.
Published by Eric Hersey en 6:39 AM