The Hospital of Sant Pau reopens its doors 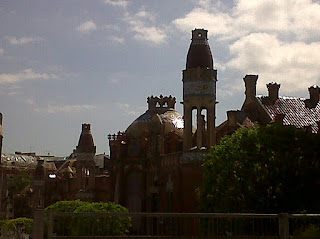 The Hospital of Sant Pau, the largest Modernista complex in the world, today is reopening the complex. After months of restoration, the central buildings of Domenech i Montaner's stunning architectural design have been unveiled again. The most impressive feature is the newly renovated Clock Tower (Torre del Rellotge), which was designed to be a central feature of the complex. The Hospital complex is a series of beautiful, Modernista buildings which are connected via underground hallways and passages, offering the sensation of being in a quiet village rather than a functioning hospital. Originally built in the beginning of the 15th century, the hospital's makeover was completed in the early part of the twentieth century, and has been under renovation since February of 2011.

For more information or to plan your private guided tour of Spain, contact The Spanish Touch at 888-480-0013.
Published by Eric Hersey en 9:29 AM