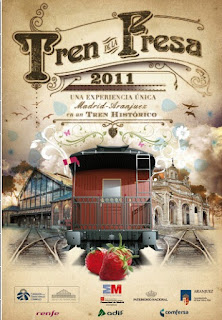 Spain's famous trains are coming back in a big way! We have already spoken about several of them, such as the Tren de la Fresa day trips from Madrid or the super luxury Transcantabrico running along the north coast. Starting in 2012 another legendary train from the past will be returning to provide guests with a privileged vantage point from which to discover one of Spain's most storied regions: Andalusia.

The Al-Andalus Train was built in the late twenties and this "Palace on rails"  has been expertly restored to its most luxurious prime. The train offers a six-day five-night tour of southern Spain for those looking for the best of everything! Routes will begin in May 2012.

For more information about planning a private guided trip in Spain, contact The Spanish Touch at 888-480-0013.
Published by Eric Hersey en 10:30 AM