Valencia Tour- something for everyone!

Another tour in Valencia, another day full of history, good food, and great shopping finds! Valencia, the third largest city in Spain, has a unique feel to it, but then again I feel that way about all of the cities I have visited. The Spanish Touch enjoyed a half-day tour with Barry and Donna Case, a couple who stopped in at this port city while cruising around the Mediterranean. So much to see, so much to share, so little time! So I will share with you just some of the highlights of our tour. 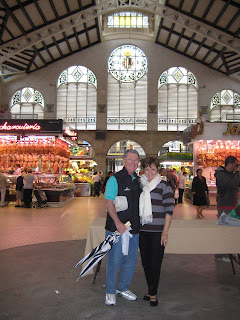 We had a great tour through the city, starting at the Bull Ring and Estación del Norte, the North train station ornately decorated with mosaic tiles. Such a style displays the Modernismo touch that graces various buildings around this city. We walked through the City Hall Plaza, spotted the rather large post office, and headed over to the Central Market. The market is quite the experience for all 5 senses as hundreds of stalls sell fresh fruit, fish and of course, my favorite, artisan chocolate, among other treats! We did not leave empty handed!

After admiring the 15th century silk exchange known as La Lonja, we brushed off our walking shoes once again. What would a Spanish city be without its cathedral? The Valencia cathedral (below, right) showcases Baroque, Romanesque, and Gothic style architecture, along with frescoes, a pair of Goya paintings, and what is claimed to be the Holy Grail. Wherever you come from, it's hard not to admire the craftsmanship that went into this building. 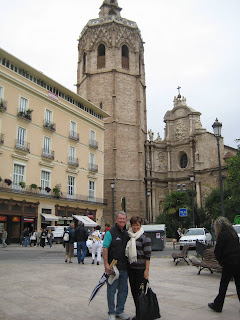 Among other treasures, we also spotted the Serrano Towers. They are hard to miss as they were once the entrance into the old Roman city. Now, they serve as a great look out point and giant piece of architecture!

Of course we stopped to eat some lunch-- paella. Valencia is the birthplace of this rice, saffron and typically seafood and/or chicken dish. As the day moved on, more and more treasures were found both on the street and inside the shops. The handmade ceramics (produced right here in the Valencia region) decorate the walls of the city, but the memory does not have to end with a photograph! Why not give into the urge to bring home a piece of Valencia's ceramic!

On the car ride back to the port, we managed to drive by the famous Opera House along with a view of the City of Arts and Sciences. (below, photo taken at previous time) ¡Qué bonita! 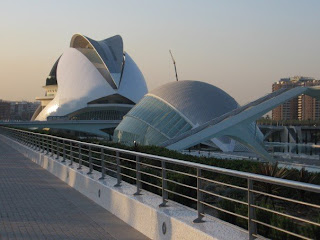 Thanks again to the Case family for such an enjoyable great tour!
- Justine

Published by Justine en 8:22 AM