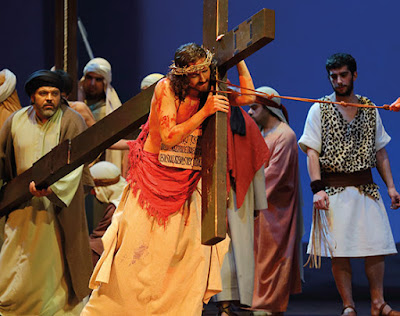 Every year in Esparraguera (a town about 45 minutes outside Barcelona) during the celebrations of Easter Week, you can see the theater show of "The Passion". This is one of the must-sees if you are in Barcelona from Februrary 28 to May 1, 2016. The Passion is divided into two parts and 48 scenes: the life of Jesus and the Passion; and the second part: Death and Resurrection. There are morning and afternoon performances.

The Passion itself is a logical evolution of the "mysteries" of the faith. A "mystery" began as a dramatic representation of Medieval origen in which passages of the life of Jesus, Mary and the saints were acted out in public. Eventually the genere evolved: the scenery became more complex, the performances went from inside the church into more public forums, music became an increasingly important part, the clergy ceaased to be the only actors, fraternities were formed around the plays...

The evolution continued until be the 14th century the mysteries had become full theatrical productions in their own right.


For more information do not hesitate to contact us:
The Spanish Touch