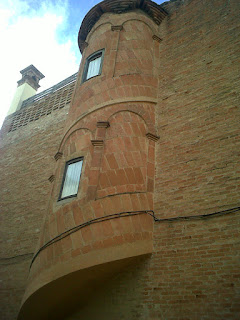 Antoni Gaudi's modernista works in Barcelona have received worldwide acclaim and are one of the primary draws for visitors to the city. The Sagrada Familia, La Pedrera and Casa Batllo are three of the most head-turning, awe-inspiring and emblematic buildings, standing as a symbol of the city's past and present, the constant combination of history and Avant-Gaurde. But what about his other buildings? Repeat visitors often  choose to return to any of these three buildings, and goodness knows there's certainly more than enough to see and explore for anyone who wants to keep going back for more. However, on this occasion we decided to expand our horizons beyond the city center, and set our sites outside the city in the Baix Llobregat area to the Colonia Guell, a work town largely constructed by Gaudi and his associates on behalf of his main sponsor, Eusebi Guell.

Begun at the end of the 1890s, the Guell Colony's original idea was to create a work town around Guell's textile factory, which up until that time had been based in Sants. Guell's idea was extremely progressive for the time, offering workers improved working conditions and even nurseries and schools for their children. The factory was shut down in the 1970s, but it is still spectacular to walk around the area. It is easy to imagine the people living and working in the town, with modernista houses and community centers like the doctor's office and the library being particularly intriguing works of architecture. 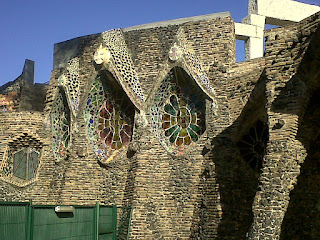 The crown jewel, however, is the church at the center of the town, designed by Guadi and in many respects considered to be a workshop for experiments he would later incorporate into his larger works at the Sagrada Familia and Park Guell. It was a full morning, and an excellent way to discover a bit more about one of Catalonia's most famous sons.


For more information on planning a private guided tour in Spain, contact The Spanish Touch at 888-480-0013.
Published by Eric Hersey en 6:34 AM